This is an excerpt from my article in BowAmerica e-Magazine.  You can subscribe for free at BowAmerica.com or http://issuu.com/bowamerica/docs/bowamerica_february_2012.

I headed out to the duck blind early.  It was about 6am, another 45 minutes before shooting time.  I spotted some a commotion deeper in the swamp.  I adjusted my LED Lenser headlamp from wide angle light to a spotlight.  I saw a bunched up brushy area ahead.  It was likely a beaver hut.  I scanned the water and could see ripples, but I could not find the source.
Shooting light came and after a 20 minute span of high flying wood ducks and ringnecks I knew the hunt was likely over except for just a few stragglers and maybe some Canadian geese.
Down near the beaver hut I saw some more ripples.  I figured it could be a grebe, merganser, or maybe a woodie swimming from deeper in the swamp. 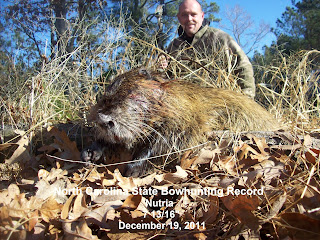 Nope.  Dead wrong.  I caught the furry head.  Trailing was a motion filled ‘S’.  Not a beaver.  But it was huge.
Nutria usually make their homes in holes they build on the shoreline.  Often, their digging will tear and expose roots.  This particular one had not made a home of the beaver den; rather it seemed curious as to whether it was occupied.


Nutria are as rat-like as it gets.  Their long tail is round and slender like a rat, rather than the waffle shape of a beaver.  Their head has rat features other than being much larger and having a blunt nose.  Also unlike a beaver, its fur is of different lengths and appears unkempt.
They were introduced to North America, relocated from South America, due to the fur trade industry.  They were valued for both their meat and their hides.  Once the value of the fur increased to a premium, at one time as valuable as mink, farmers found a way to raise them.  They were easy to keep, had large litters, and females could breed the day after giving birth.  Due to the farming of the nutria, the fur become over abundant and the value plummeted.  A hurricane hit the Southeast and many of the farmed nutria escaped.
Like many invasive species, they began to take over their habitats.  Nutria feed only on the bottom of saplings and plants, leaving over 80% of the plant useless.  They choked out the muskrat, as they shared habitats and dens.  And with the beaver falling to near extinction, the nutria’s breeding habits, able to give birth nearly 3 times in a calendar year, the nutria overwhelmed many areas.
If you know where to look, you can find nutria in nearly any southern state, and they range as far north as Ohio.  They can expand further north if there are subsequent mild winters.  The only barrier is they tend to get frostbite on their tails, causing infection and death.
As mentioned prior, I took note of where I saw the nutria and the time.  The next time I would be in the water, the bow would be in hand rather than the shotgun.
A couple of days later, the nutria had a head start on me.  As I was headed to where the blind was, I saw him already swimming well ahead as the water and air was clear.  I positioned myself near the blind and could see it still swimming amongst the trees in the swamp.
It only took 15 minutes for it to become curious enough to see what I was.  Once it was in range, about 20 yards, I released the arrow towards its mark.  No thrashing, no circling, no fighting.  Just a roll over and the arrow was sticking nearly straight up.
Once there, I had to look to see if it was a beaver and not a nutria.  It was as huge up close as it looked the other day.  I pulled it into the boat and headed to shore.  This was by far the largest I have taken.

Author David L. Samuel is providing two each of his novel Nightwolf and novella The Guilty as a giveaway. That is FOUR lucky winners! These are e-books with a hunting setting that are great for reading in the stand. Follow the blog to enter. Winners will be announced December 1, 2011.